History of the Surrounding Area
European explorers have traveled the waterways and trails of Bayfield County since the mid-1600s, about the same period that foreigners settled the east coast.

It was 1659 when Radisson and Groselliers, two Frenchmen from Three Rivers, Canada, hired Indians to take them via canoe across Lake Superior to the Head of the Chequamegon Bay.

Interested in buying furs, they traveled forest paths (a four-day hike) and water routes to the large Chippewa Indian village of Lac Courte Oreilles. In letters, they mentioned the beauty of Lake Superior and the forest, but it was greed that drove them. Hundreds of canoes loaded with furs were transported to ships and sent to Europe.

Bayfield County supplied the beaver fur for hats for much of the European royalty. It was a lucrative business for Frenchmen for many years. Some of them were killed by the Indians, some returned to Canada, and many lived with Indian wives and were absorbed into the tribes.

Following the fall of Quebec, the English did some fur trading. They lost the territory following the Revolutionary War. The United States claimed the land, which incidentally still belonged to the Indians. In 1842, the Chippewa ceded it to the United States.

In 1831, Henry Schoolcraft, a government Indian agent, traveled the area and left an interesting account of his adventures. To try to prevent war between the Sioux and the Chippewa, he paddled the waterways south from Chequamegon Bay. He wrote, “This lake is about eight miles long and of irregular width. We went, thence by portage into Turtle Lake (Lake Owen Swamp), Price Lake, Ferry Lake the rivers Namakagon to St. Croix and down to the Mississippi.” The Owens and Frank Drummond traveled this same route in 1879 when they were cruising timber.

Because there were no roads, the logical answer to the transportation problem was the railroad. The rail line from Hudson to Spooner was completed in December of 1879, to Cable in November of 1880, Drummond in 1882 and GrandView in 1884. Cable became a railroad center with 500 to 700 workers using it as their headquarters. It was a hastily-constructed town of crude buildings, occupied by rail track men, lumberjacks, fishermen, drummers and tourists. It was a town of saloons, hotels, boarding houses and a couple of general merchandise stores. A fire in 1882 destroyed the village and a new town emerged from the ashes. The railroad construction crews were gone and people interested in making homes and establishing businesses acquired the land. By 1900 there was a mixture of nationalities settled in the vicinity. Many of the townspeople worked for the railroad, but there were also tradesmen, farmers, doctors, teachers and real estate agents. These first settlers became aware that they were in a country where city folks longed to vacation- it was a tourist’s mecca.

The mill towns Drummond, Grand View (Pratt), and Namakagon were very different from Cable. German, Swedish, Norwegian and Irish people were recruited to work in these towns, and became the earliest settlers. They became family towns and today, descendants of those first settlers still live here.

Drummond Public Library & Historical Museum
Phone: 715-739-6290 (Library) 715-739-6500 (Museum) | Website
The library was founded in 1926, but been housed in the new building since 2001 located in the town of Drummond. The new space was designed to resemble the old Rust Owen Company Store & currently shares the space with the Drummond Historical Museum.

The library provides internet access, current and best selling children and adult materials, and a very large collection of popular videos. A reading program is held each summer for children.

The museum depicts the history of Drummond, a company town. The collection features historic photographs and artifacts from the logging camps and mill operations, giving insight into the lives of area pioneer families. It also includes a wildlife collection featuring birds and animals indigenous to the area. The Museum is available for private tours (if interested please call for appointment).

Cable/Namakgaon Historical Museum Phone: 715-798-5070 | Website
Come visit us at The Cable/Namakagon Historical Museum and take a step back in time and explore the area’s rich history. The museum was built around 1905 and initially used as a potato warehouse. Later the building was used as a warehouse by the lumber company, an apartment, office building, and as an ice cream parlor before it was donated to the Cable/Namakagon Area Historical Society and turned into a museum. “The little museum with big history”.

Since the Cable/Namakagon Historical Museum opened its doors to the public in 2005, it has offered a variety of historical exhibits and shows. The main exhibit themes are immigration, logging and agriculture, Native American culture and tourism. It presents special events such as the youth history program, quilt shows, Native American art, cultural events and others. The building is located in the town of Cable.

Forest Lodge Library Phone: 715-798-3189 | Website
This historical hand-hewed log library is located next to the Cable Natural History Museum in the town of Cable and was built in 1925. In 2000, the library was listed on the National Register of Historic Places. It became a joint library of Cable & Namakagon Communities in 2007. This full service public library offers internet access, an excellent children’s section and Wisconsin and Native American sections. Children’s programs are held during the summer. 2010 marked the 85th Anniversary Celebration. 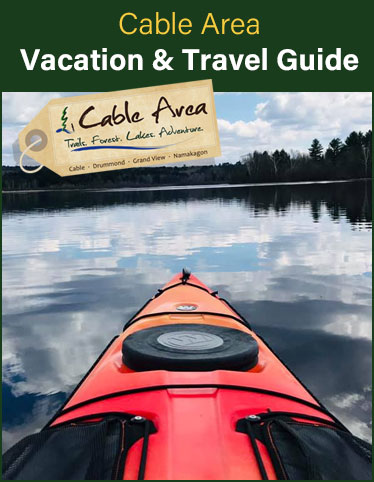